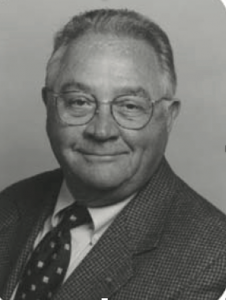 Today I had the pleasure of interviewing Don Dickerson, the Santa Monica Rotarian who holds the longest running membership in our club.  Don’s energy is contagious – he sports a perpetual smile and positive attitude; in fact, you can’t help but find yourself broadly smiling while speaking to him.

Don ran a successful ophthalmology practice in Santa Monica until his retirement in 2008.  He thought it would be a good idea to retire before people started telling him that it was time.  In retirement, Don and his wife Tam (who’ve been married for 63 years and have two daughters) could take more time for traveling.  Don and Tam always took off at least a month every year and have traveled to over 160 countries.  They also have more time to spend with their three grandsons.

Don initially was a member of the Rotary Club of Beverly Hills before joining our club in 1965. When I asked Don about his motivation for remaining an active Rotarian all these years, he spoke fondly about the meaningful friendships he has made in the club and enjoying so many of the interesting guest speakers the club has hosted.

One of Don’s most memorable Rotary experiences was a trip that the club made to Mazatlán, Mexico (Santa Monica’s sister city), to donate medical equipment.  He recalled that the Mayor of Mazatlán was a fellow Rotarian who showed them a great time and Don confirmed that some stories from this trip are best told over drinks.

It’s members like Don Dickerson (and the lifelong memories that our community of Rotarians create together) that make our club an amazing place for fellowship and friendship.