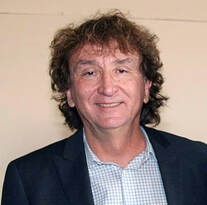 Chris Baca joined Meals on Wheels West in January 2014.His extensive non-profit experience includes his role as Regional Director for Community Healthy Charities of America overseeing efforts in nine states in the Western Region. Mr. Baca also served as Executive Director for Community Healthy Charities California working in Los Angeles, Ventura and Santa Barbara counties with a variety of clients including Kaiser, Toyota and the City of Los Angeles.

In the last five years Meals on Wheels West has increased the number of meals delivered by more than 200%. Meals on Wheels West has partnered with the VA and American Legion to expand their program to include veterans of all ages. Their newest program, Food and Shelter, focuses on delivering meals to the formerly homeless, once they have been housed.

He is a graduate of SAMOHI where he ran track and cross country. His track coach was Olympic medal winner Hal Connolly. He is a longtime resident of the Westside and is excited about being a member of Rotary Santa Monica.

Fun Fact. He once was thrown into the rooftop swimming pool at the legendary Continental Hyatt House by members of the Chili Peppers at an after-show party.