ROTARIAN OF THE WEEK – Diane Margolin, Club Member since 1989 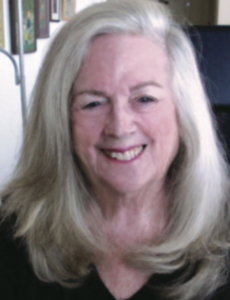 From the time she created The City Scene, the first family newspaper in Los Angeles in 1984, Diane Margolin has made it a point to become an active part of the Westside community as the publisher of local newspapers.
When she first started publishing The City Scene, a cousin told her about a morning radio show called Good Morning L.A. on KMPC. She contacted the hosts and began sharing information for parents about places to take their children on the weekends. Soon after, she was taping spots for parents at a Fifth Street radio station in Santa Monica owned by Rotarian Jack Siegel. She loved doing radio spots.
This Los Angeles native combined her background as an elementary school teacher wiith her writing skills to do public relations for the Santa Monica Police Department, the West Los Angeles, Century City and Santa Monica Chambers of Commerce, the Rotary Club of Santa Monica, the Santa Monica and Venice Boys & Girls Clubs, and the Santa Monica-Malibu School District.
Past publications Diane created include The City Scene, On Montana, The Miracle Mile Metropolitan, Watch Out – a monthly crime prevention bulletin for the SMPD, the Brentwood Villager, The Conejo Valley Connection, a family paper, and the Rotary District 5280 Newspaper for District Governor Archie Morrison.
Joining our Rotary Club in 1989 was quite an experience. Diane recalls that she was the fifth woman with about 150 men in the club. “I had taught elementary school for a good part of my adult life, and it was quite a change, as you can imagine. When I gave my craft talk after a month, it was only six minutes. I hadn’t had time to get to know many of the members.”
“In Rotary I have been secretary, a director, received awards and done the newsletter. I also began coordinating special events such as the 80th and 90th anniversary celebrations for the members, doing centerpieces, Secretary’s Day, Dethroning dinners, talent shows, fashion shows, skits, and more, as the years went on. What I like best about being a member of our Rotary Club is that you feel as if you are part of an extended family.”
To celebrate the SMPD’s Centennial in 1997, she created, wrote, typeset, did the photography, layout, and promotion for a cookbook with recipes from police staff, and Santa Monica restaurants (past and present).
In 1998, Diane answered an ad in the New York Times that took her on an adventure to a very large Manhattan apartment complex where she became their activities director. That job entailed doing their monthly newspaper, putting on special holiday events for the residents, and overseeing their summer day camp. The New York Times had a contest for people who got their jobs through their classified section. She entered, was one of those selected, and was featured in a section with a full color page of her with some of the people she worked with in New York. She also joined the Rotary Club of Chinatown when she lived there.
When she returned to the L.A. area in 2001, she began publishing The Santa Monica Star while managing a 25-unit apartment building on Ocean Avenue for 14 years. What an experience that was! She continues to publish The Santa Monica Star newspaper which celebrated its 20th anniversary last September of 2021.