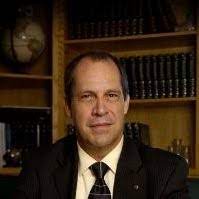 David was born in Santa Monica and currently lives in Tarzana.  He’s the son of John Bohn, a past president of the club; and June Bohn, a past Rotary-Ann connected to the club.

He married Lisa Kludjian in 1989.  They met in the Santa Monica Jaycees, where Lisa was their first female president.  David and Lisa have two children, Jessica Bohn and Nicole Kludjian.  They also have a grandson, Harper Bradley Bohn.

David was President of our club in the year 2011-2012 and is a trustee of the Santa Monica Rotary Club Foundation.

He has been employed by The Bradmore Group since 1991.  The Bradmore Group is a private equity firm with commercial real estate investments and David is currently Chairman of the Board.  He is also President of Bohn Brothers Moultrie, Inc.

David says some of his earliest memories are from attending Rotary Club of Santa Monica Christmas meetings in the early 1960s (at the time the club met at the Miramar Hotel) where his father would receive an award for the family with the most boys (David is the youngest of four).