Kathy was born in a small town, Tooele, Utah, the oldest of several kids.  Her military family moved a lot, and she lived in nearly a dozen states before her 16th birthday.  The family eventually settled in Idaho where she attended high school and later college at Boise State University, earning a BA in history.  Go Broncos!  Her first professional job was teaching high school history.  She also has completed the public relations certificate program at UCLA.

After moving to sunny Southern California, Kathy started working in the entertainment industry.  She was an on-air writer/producer for KTTV, Channel 11, served as director of publicity for the Hollywood Chamber of Commerce and worked on several feature films including “Pretty Woman,” “Kindergarten Cop,” and other not so famous movies.  Wanting to do something new, she changed careers and started working in the hospitality business.  Her long tenure at Hilton Hotels Corporation began when she was hired as director of publicity at the Las Vegas Hilton, at the time the world’s largest hotel.  She soon moved to Hilton Gaming Corporation and later returned to the company’s headquarters in Beverly Hills as vice president of corporate communications.  These days Kathy is a communications consultant based in Santa Monica.

Moving around as a kid led to her love of travel.  Whenever possible she plans trips and new adventures.  So far she has visited about 40 countries (Thailand and Kenya are favorites) and 48 of the United States, just missing North and South Dakota, though she plans to see Mount Rushmore and Fargo pretty soon.

Kathy is a devoted family history researcher and has traced both her maternal and paternal lines back to the earliest American Colonial settlements.  Getting lost in a good book is another favorite pastime.

A proud Rotarian, she co-chairs several committees and volunteers regularly at service projects, often joined by her daughter Alanna and husband Mark. 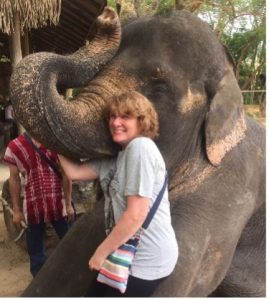