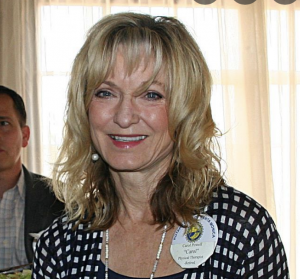 Carol was born and raised in Delaware.  She received a Bachelor’s degree from the University of Delaware followed by a Masters degree from USC in Physical Therapy.  Carol spent a majority of her career in private practice, which she started and owned for 25 years in the Antelope Valley.  One of the programs she is most proud of starting was an aquatic therapy program-one of the first in the L.A. area in the 1990’s

She is married to fellow Rotarian Bill Powell who she met in the USC scuba diving club.  They have a son and daughter-in-law who live in Woodland Hills with their two-year-old grand-daughter who Carol regularly babysits.  Carol’s daughter lives in Valley Village and is Vice President of International Distribution at Universal Pictures.

Carol enjoys adventure travel especially in Africa and road cycling trips in countries around the world. Some of her most memorable accomplishments are bungee jumping off the Victoria Falls Bridge, finishing 2 Big Bear Lake Triathlons, completing a 2-day road cycling fundraiser from Los Angeles to San Diego with “kids” 30 years younger than herself, and completing a difficult and challenging gorilla trek in Uganda.  Her other interests include skiing and partying with fellow Rotarians.

Carol can’t wait till her term as Special Assistant to the President is over so she can resume her active travel schedule.