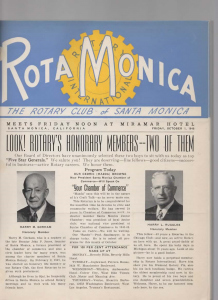 Harry M. Gorham was a Charter Member of the Rotary Club of Santa Monica.  He was named the first “Honorary Life Member” of our club in 1927.  Harry was born in Cleveland, OH in 1859. He attended school there and was preparing to attend Harvard, but his plan did not materialize. Gorham’s uncle, John P. Jones, was a U.S. senator from Nevada, and he persuaded young Gorham to go to Virginia City to take a job in the Comstock silver mines, which Jones owned. The year was 1877.

The Comstock Lode would hold Gorham’s interest for 26 years, during which time he progressed up the ladder of success to superintendent of mines. He assumed a great deal of company responsibility because of the absence of his uncle, who was busy with the senatorial affairs and his vast real estate holdings in Santa Monica, Calif.  For an interesting read, try the book “My Memories of the Comstock” by Harry M. Gorham.

Senator Jones founded Santa Monica in 1875 along with Robert Symington Baker.  Baker had purchased the 30000-acre Rancho San Vincente y Santa Monica from the Sepulveda family.  Jones built a mansion at Wilshire and Ocean called it Miramar.  When he died, his wife sold it to King Gillette of safety razor fame.  Gillette later sold to Gilbert Stevenson who turned it into a hotel.

(editor’s note: W.H.L Symington was another Charter Member of the Rotary Club of Santa Monica.  While I have found no proof of a family connection, it’s a heck of a coincidence that Robert Symington Baker was the co-founder of Santa Monica with Harry’s uncle.)

After a brief illness, Gorham left the mines and went to Southern California to join his uncle in his business ventures there. Gorham eventually became president of the Bank of Santa Monica.  Harry loved the Ojai Valley and eventually moved there while staying an active member of our club as shown in the 1948 page from RotaMonica.

Harry L. Ruggles was also a Charter Member of a Rotary Club.  But he was one of the original five in Chicago in 1905.  When he retired in 1947 and moved to Santa Monica, he was the longest tenured member in Rotary and a “Perpetual Member of Rotary International”.   He was an honorary member of several Rotary clubs but lived in Santa Monica and was active in our club from 1947 until his death in 1959.

According to the official Rotary International History; “On  23 February 1905, Paul P. Harris, Gustavus Loehr, Silvester Schiele, and Hiram E. Shorey gathered in Loehr’s office for what would become known as the first Rotary club meeting.

Each of the first four Rotarians, and Harry L. Ruggles, who is often called the “fifth Rotarian,” brought different professional perspectives to the organization.

Originally from Michigan, Ruggles was a graduate of Northwestern University in Evanston, Illinois, and joined Rotary at its second meeting. He was treasurer of the Chicago club during its first year, club president from 1908 to 1910, and a Rotary director from 1912 to 1913. He is known for having introduced singing to Rotary club meetings. His printing company, H.L. Ruggles & Co., printed the first issue of The National Rotarian and the first Rotary songbook.”